Five Ways to Protect Your Project from Scope Creep

If you’ve ever been involved in an enterprise software development project in any capacity, you’ll likely have experienced scope creep at some point. Even if you haven’t heard the term before you will know it when you see it. For consultants, scope creep tends to come from a client email, asking for an additional small feature to an already scoped project. For clients, it might come from a contractor, telling you that something unexpected has come up.

Scope creep can also be the result of the best motives. A firm might prioritize building a good relationship with their clients from the start. That could lead to the firm agreeing to add little extra details at no extra charge. They may even create them of their own accord. It sounds like a win-win for the client but this is a system that can undoubtedly grow into an exploitative and unbalanced one. Of course, even in-house projects aren’t immune.

So how do you avoid scope creep? 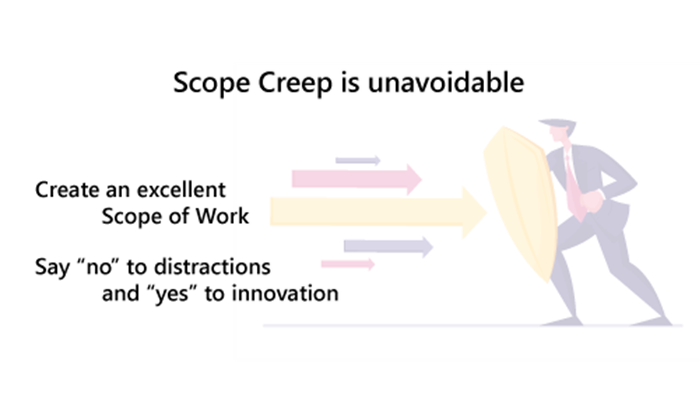 The easiest way to avoid scope creep is to prevent it by creating a detailed Scope Statement before the project begins. The first step in creating an effective statement is to carry out a thorough discovery phase to identify the problems that need to be solved and project goals. Discovery also includes taking an in-depth look into the existing infrastructure to create the best solution. The result of this process is a software requirements document with a plan for what is going to be built and when.

Scope creep can also occur wherein lies a failure in communication between key stakeholders. The assurances a sales team might make to win a client may not always correspond with what the technical team can deliver; whether functionality or timescale. A scope statement is developed with input from across the business, thus effective managerial support will be more realistic.

Any project has more than one way to achieve the objective. A lack of clarity about the outcome can be a major contributing factor in scope creep. This why it is important to provide an overview of each phase in the process before the work begins; allowing the client to make an informed decision. Imagine a world, free of sleepless nights and late-night phone calls about missing features or misinformed deadlines!

Even with a clear requirement document, projects rarely go entirely as planned. Good communication is the key to preventing small issues from turning into bigger problems. One way to improve communication is to create a mutual feedback and review process within the contract. It’s also good practice to include a sign off procedure with a preferred method of contact to avoid delays if changes to the scope are needed.

While your scope statement will set out the extent of the project, it will be developed in sections or phases. When scope creep affects one element of a section, it behaves like a ripple effect and impacts the entire project. Breaking the project down into milestones with realistic task duration will help with precautionary measures and early detection to ensure corrective action and diligence.

What’s the Worst That Can Happen?

Scope creep could leave your budget spinning out of control around a system that doesn’t justify the cost. We've had many encounters over the years with companies who had spent months in development but couldn't finish more than 20% of their project due to scope creep.

In 2002, 21st Century Insurance invested $100 million to develop a system that managed applications including billing, claims, and customer services. After 5 years, the product was still in development and only supported 2% of the business. Analysts later concluded that a better result would have been achieved using off-the-shelf components.

Scope creeps seem menacing because they can completely derail or cripple a project at any time. But if all parties in the project have a higher level of trust and communication, these interruptions can be seen as positive agents of change.

How? Well, they are changes in disguise and not all changes are bad. Challenges lead to growth and every bump in the road can develop into a greater outcome, especially when you've created room for them. If you followed these steps, then you will already have the time, organization, and budget to incorporate any changes in your project scope to recover and maintain progress. So just make sure to track and monitor all changes and their impact; as long as there are no liabilities, you can go for it!

Co-founder and a Managing Partner at CSW Solutions. You can find Yoel on LinkedIn and Twitter.