Azure Functions vs AWS Lambda: What Are the Differences?

The advent of serverless cloud computing came a decade ago while startups were busy investing in expensive servers. There are now two tech giants competing for dominance in serverless cloud: Microsoft's Azure Functions and AWS Lambda. And these two are the new way to play.

The differences between Azure Functions and AWS Lambda can be subtle. At times, they're even obtuse, leaving many to wonder if there's any difference at all. But don't worry if you're feeling lost or don't feel like trawling through dozens of pages of documentation. We've done the hard work for you. Keep reading for the only comprehensive overview you'll ever need.

Azure Functions and AWS Lambda are competing cloud computing suites offered by Microsoft and Amazon Web Services, respectively. Both are seemingly equivalent services that allow users to write applications in a variety of programming languages (more on those below) and each application effectively functions as an event-driven platform.

The Function as a Service Model

But what is the Function as a Service (FaaS) model?

It is a serverless computing service that lets you develop, run, and manage application functionalities without the need for expensive server hosting and maintenance. FaaS offers several advantages for businesses, such as:

Of course, when switching to the FaaS model, there are tradeoffs. The biggest one is that you'll be embedded with a service provider (known as vendor lock-in) and thus, migrating may be difficult. But the right migration assistance platform can mitigate this type of vendor lock-in.

We'll get back to that later.

There's a Lambda equivalent in Azure for many aspects of the platform but not all. We'll break it all down here for a quick reference (and a handy bookmark) as you follow along through this comprehensive post.

Functions and Lambda work on the same at the fundamental level: They execute code on-demand.
Here's a handy table comparing highlights between the two:

Hosting options are where these two leaders differ. If you're on AWS Lambda, there's only one hosting option for every kind of app. But the Azure Functions user has several hosting options:

The cost of using FaaS depends on three factors:

The pricing plans are only available with Azure Functions and typically, the number of requests are billed per million, per month. Compute time is the measured duration of a function which is in GB-seconds and higher memory requirements end up costing more. As we mentioned earlier, there are subtle differences between Azure Functions and AWS Lambda.

As you can see, the difference is in the GB-s price and it is a difference of around 4 percentage points. Both Azure Functions and AWS Lambda offer 400,000 GB-seconds and your first million executions for free.

AWS Lambda requires programmers to configure their (maximum) memory allocation per function in advance - anywhere between 128MB and 3GB. One advantage here, is that optimization can lead to reduced costs, particularly where charges are based on the memory you allocate, as in AWS Lambda. Azure Functions allocates 1.5GB as standard. On a premium plan, you're allowed up to 14GB of memory. Since the cost of duration is dependent on the memory allocated to each function, you can manage the memory by dividing it between 128MB and 10 GB, in 1MB increments. This table shows how memory size can be priced based on smaller storage options to scale. 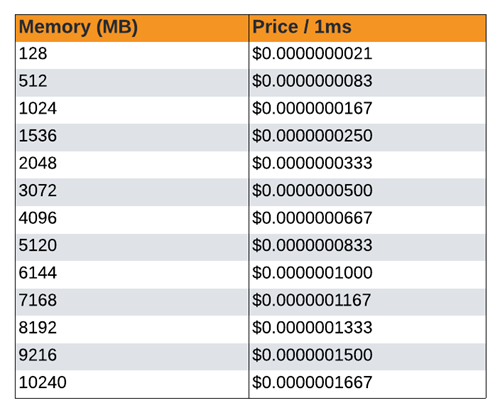 Debugging in Azure Functions is simply a matter of hitting the "F5" key in Visual Studio. But more importantly, it can be done locally or remotely.

Scalability is important because of the potential for sudden, unexpected loads on function calls. In general, all FaaS models are designed for scalability. They operate on an event-driven model (hence the lower cost) and adapt as the workload increases. But in practice, there are even bigger differences between our two contenders:

Azure Functions uses a component called the scale controller to monitor the rate of events and determine whether to scale out or scale in. What this does is it regularly checks the queues and issues peak commands. Based on the data received through the commands and any latencies received, it decides whether to use any additional VMs or not. When a latency is measured as too high, a VM will be added until it reaches the optimum level of performance. This controller will keep running regardless of the the number of queues and Azure Functions will make sure that services are always available when the application requires them. You can also configure your application for geo-redundancy, which is basically to distribute your data across multiple datacenters to avoid any major failures when a primary program is not available. 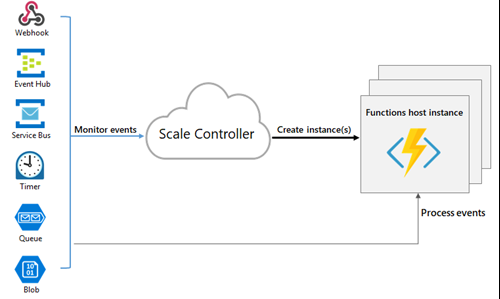 The number of functions that run at once can be customized at a higher cost with Lambda. AWS Lambda provides users with configurable concurrency management. In other words, AWS will request and/or scale the code automatically to support its rate without any work from your side. This allows performance to be consistently as high as the rate of frequency of events, along with running the code within a shorter amount of time. Lambda can start as many instances as required without configuration delay and manage lengthy deployments for faster scale-out services and synchronous operations.

When it comes to cold starts, Azure Functions recommends running in a Premium plan or in a Dedicated plan with the Always on setting enabled. It is otherwise, sluggish in performance here, taking up to 5 seconds to manage the added latency of scaling from zero to one. AWS Lambda can start as many instances as required without configuration delay and manage lengthy deployments for faster scale-out services and synchronous operations. It has an average wind-up time of less than 1 second across Javascript, Python, and C#.

However, this is a drawback with solutions that, "look good on paper," as they say. The cold start argument is favored by the serverless computing skeptics and its complexities can easily be mitigated with Microsoft's Premium or Dedicated plans.

Lambda offers support for all of the above, plus Ruby and Go on top.

Azure Functions uses triggers and bindings. The trigger causes a function to run and defines how it is invoked. Each function has only one trigger. Bindings are optional and can be in the form of input or output bindings that allow you to provide parameters to functions. Associated data (e.g. a timer) is the function's payload. Triggers and bindings help you avoid hard-coded access to other services. In other words, it's flexible.

AWS Lambda works by receiving a JSON object as its input and outputting in JSON format. Details can be found in the Lambda SDK.

Azure Functions provides business-ready HTTP Integration by default with a ready-to-use HTTP endpoint. By default, the runtime of the function includes HTTP and triggers with other binding and data to differentiate between packages. These .NET class libraries have apps that use bindings that can be installed using NuGet packages or app extensions in Java. The HTTP trigger lets you invoke a function with an HTTP request. You can use an HTTP trigger to build serverless APIs and respond to webhooks. By default, when a function for an HTTP trigger is created, the function is customizable using the optional route property on the HTTP trigger's input binding. You can use any Web API Route Constraint with your parameters. By default, all function routes are prefixed with api but this is also customizable.

AWS Lambda requires an API gateway, which configures the integration request and integration response for you or Elastic Load Balancing (ELB), which automatically distributes incoming traffic from the application across multiple targets and virtual appliances in one or more Availability Zones (AZs).

To clear up some confusion, Azure Functions is the AWS Lambda equivalent for Microsoft. Azure Functions was rolled out half a decade ago, while Azure itself made its debut in 2008. Lambda was introduced in 2014 and thus, carries more recognition in serverless computing.

Azure Functions and AWS Lambda both operate in the same niche. They're equivalent but not the same, as is clear from this post. Here's a feature-by-feature breakdown at a glance.

Azure Functions vs AWS Lambda: Which Is Better?

There was a point in time, when AWS Lambda was the heavyweight champion of the serverless computing world. Faster rollout and ease of access made it the go-to platform. But it is clear that this age has passed for AWS and Microsoft has claimed the title as champion of software.

First and foremost, Azure Functions is cheaper at scale. What's more, the ability to debug remotely is absolutely key to the potential in growth and its appeal to future business as remote and hybrid access become synonymous in the digital landscape.

But it is Azure Function's flexibility with its triggers and bindings framework that gives it the ultimate upper hand; particularly for businesses that are already integrated with other Microsoft platforms.

Getting Help With Azure

The key benefit of serverless computing is cost reduction. There are endless possibilities in how your budget can be down-sized when you don't have to run your own servers and train or certify staff to manage every new technology to stay competitive. You'll only pay for the CPU and memory load needed when functions are called.

Migration From Another Platform

The benefits of cloud migration to Azure from Lambda (or any other platform) are substantial. Azure offers more than 100 cloud services and is the front-runner in terms of time to market, business agility, and integration with mobile platforms.

And let's be honest, migration often presents several headaches. (for birds too!)

On-premise applications need evaluating, upkeep, and on-going support. Rehosting will drive up expenses and increase the delivery time for your customers. Refactoring an application isn't easy and neither is rebuilding one on a different platform.

That's why—even if you're a SaaS business—it's worth considering the delegation your migration requirements to a team of specialists.

Managed service providers (MSPs) offer increased cybersecurity and build future-proof network infrastructure. The benefits of switching to an MSP instead of handling everything in-house include:

It is essential to have a reliable and scalable application to meet any changes in business needs, as we've seen organizations learn and re-learn how to thrive in the digital space. Serverless computing lets you pay only for what you need and thus never worry about disproportionate growth, unforeseen peak load, or error tolerance.

When evaluating Azure Functions and AWS Lambda, it was clear that there was a lot of overlap but the differences were also enough to take note of how one can clearly benefit the future of your business and operations more than the other. At the end of the day, Azure Functions is cheaper, provides more remote access, has a wider array of deployment options, and offers HTTP integration as standard.
It wins the day in our book.

Are you looking to migrate to Azure or outsource your Azure to managed services? Our teams of software architects, designers, and engineers have your back. Explore our Mircosoft cloud services!

Cloud migration and managed services are the best way to improve your business and operations. Download your free Azure Migration Essentials eBook and get started on your path to digital transformation.

Co-founder and a Managing Partner at CSW Solutions. You can find Yoel on LinkedIn and Twitter.